It’s been a while since my last post, but I have an exciting update – I went to Japan in March, and I’m here to tell you all about it! HOORAY! I’m willing to overlook the fact that this post is about four months behind schedule if you are… Oh, you are? Awesome. Thanks for being so cool! So, how did I find myself halfway across the world? Glad you asked.

To be frank, 2017 didn’t exactly scream excitement for me – same house, same city, same long nights bingeing The Office. So when I had the opportunity to visit my Japanese friend, Chihiro, in her home country, I jumped at the opportunity. We stayed at her family home in Osaka during the first half of the trip and ended with a few nights in Tokyo. It was really wonderful to experience Japan through the eyes of a local family and also as a tourist in the big city.

Although I could write an entire novel about those eight days, in the interest of time (both yours and mine!) I’ll do my best to keep this post as brief as possible. Feel free to skip over sections that bore you and obviously do linger on the food segment. Whether you’re interested in visiting Japan yourself or you simply want to see what life is like on the other side of the world, fasten your seat belts because we’re about to takeoff! Too cheesy? That’s too cheesy, right?

*sigh* Here’s a recap of my time in Japan…

The flight from LAX to Osaka’s Kinsai airport is roughly twelve hours. Most likely, your flight out of the U.S. will be operated by Japan Airlines, meaning English is the secondary language. Bring plenty of things to do, because chances are you won’t be passing notes with your seatmate unless you’re fluent in kanji. While this can be very unnerving for those of you visiting your first non-Western country (like me), especially alone, do your best to overcome that anxiety. If you have a mild panic attack while boarding the plane (also like me), do not consider jumping ship on your entire vacation at the last minute (like I almost did). Honestly, maybe grab a Xanax before you go. That’s my advice.

You’ll be served dinner and breakfast, so don’t overpack your bag with snacks (again, like me). Also, unless your gut is lined with steel, try to avoid alcohol on the flight as well because that turbulence is very real. Chances are it’s normal and you won’t die, but no promises. I’m not a pilot.

Summary: No one speaks English, don’t be alarmed. 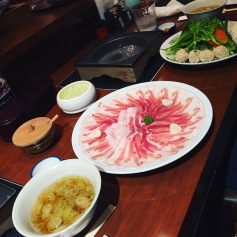 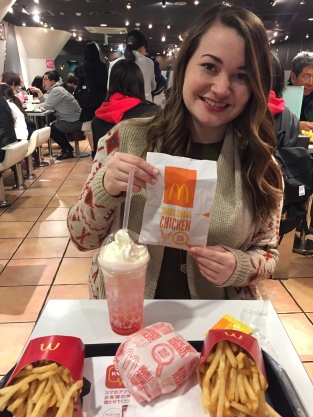 You may be tempted to romanticize Japanese cuisine as bizarre and totally foreign (people keep asking me if I ate any insects?), but most dishes are simply a creative combination of rice, noodles, and protein. Pro tip: pack a fiber supplement. You’ll become closely acquainted with chicken, fish, pork, and beef – on occasion. Seaweed is in just about all food, and soy sauce doesn’t belong on steamed rice. Who knew?! The sushi is everything you dreamed of and more, but my favorite dish is guydon – sautéed beef tips served with steamed rice and raw egg. Don’t knock it until you’ve tried it! Also, spoiler alert: matcha is king in Japan. You will see matcha in eeeeeeeverything.

Now, I like to consider myself an adventurous eater, but even I had a little trouble overcoming my Western instincts when faced with torisashi – sliced raw chicken. Yep, RAW CHICKEN. As a specialty dish offered by my host, I really didn’t have an opportunity to refuse – which I’m now grateful for. The texture is really similar to sashimi (sushi), and the sesame sauce overpowered the taste. Because chicken is prepared to be eaten raw in Japan through strict handling procedures, I am pleased to say no one got sick. If you get the opportunity to eat raw chicken IN JAPAN, I say go for it! When it Rome, right? 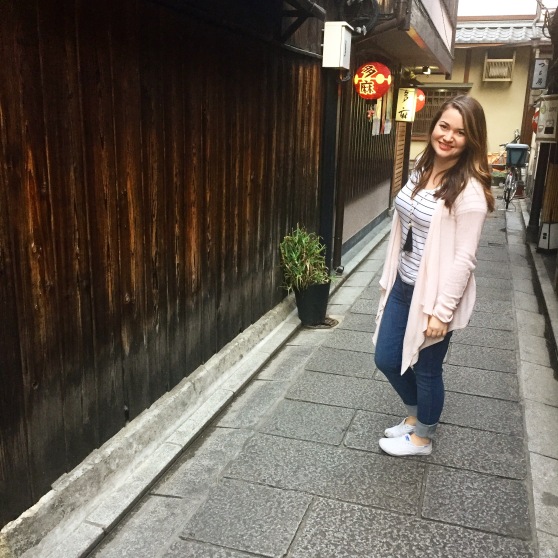 Having only stayed with one Japanese family, I cannot speak for all Japanese families – however, from what I observed, life in Japan isn’t so different from life in the U.S. Because the country is so mountainous, the cities are very dense – meaning houses are narrow, tall, and very space efficient. Residents rely heavily on public transportation, mainly buses and trains, and usually walk 10-15 minutes to the nearest station. It is not uncommon for families to own a car, but this is used primarily for short distances, inclement weather, or special occasions.

Due to long commutes on public transportation, families are not often at home together except for the late evening. Like many American homes, they enjoy kicking back after a long day with TV (see Takarazuka’s Exciter) and playing Candy Crush on their phones. Japanese people are very clean, which means no shoes in the house, bathroom slippers, and very intense toilets. Google it. The family unit is pretty important in Japan, so it’s not uncommon for kids to live at home through college and beyond – meaning households tend to be a little bigger. All in all, family is family in every country. In the words of Disney, “there’s so much that we share…it’s a small world after all.”

Before departure, I read that Japanese citizens are known for their courtesy and friendliness. This is absolutely true! Not only were my host and her family the definition of hospitality, but strangers were always willing to offer directions, make dining recommendations, or just apologize (repeatedly) for accidentally bumping into you on a crowded train. The Japanese are big on gifts, so if you plan on using a guide or host definitely consider purchasing presents beforehand.

Now, let’s talk safety. The entirety of the trip was two young women walking alone down dark alleys at night, and I did not feel unsafe one time. Not. Once. I’m usually a nervous Nancy, so that statement carries some weight. For those travelers who are still unsure, most trains offer a female-only car. You can also grab a cab anytime you feel anxious walking at night.

There are so many things to do in Japan, you will inevitably run out of time. Plan on it. When organizing your trip, consider what’s most important to you: historical sites, religious shrines, or modern-day entertainment. Obviously you can do a combination of all three, which I did! Because public transportation is so efficient, you can easily hop between attractions on any given day though they may be cities apart. This is especially helpful when traveling outside of Tokyo.

I’m a history fan, so my favorite attractions were the Osaka Castle and the Fushimi Inari-taisha shrines in Kyoto. As a major Nintendo nerd, I also lOsT mY mInD at VR Zone, where I got an opportunity to play the world’s only virtual reality game of Mario Kart in Tokyo. Would HIGHLY recommend for gamers. Although I ran out of time, I’d also suggest visiting a karaoke lounge and catching a sumo wrestling match! For me, Disneyland and Disney Sea stole the show – but you already knew that! Disney Sea is a definite must (maybe even over Disneyland), but if you have the time definitely hit both parks. You won’t be sorry.

One last thing! If you get the chance to go clothes shopping or plan to bring home any fashion souvenirs, buy everything two sizes up. Never ever try on clothes in the dressing room because it will disappoint you when they don’t fit. 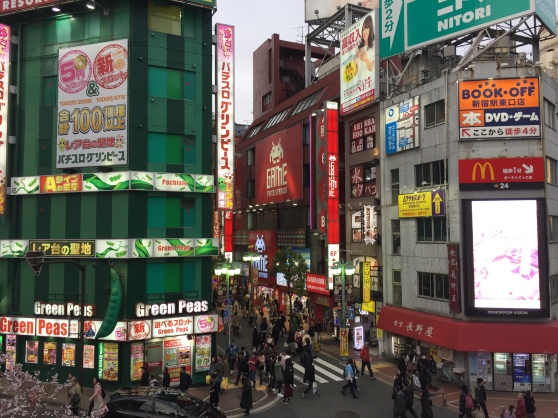 Listen up, folks. This is where it gets juicy. I’ll be the first to admit I’m not rich enough to be a globe-trotter or disciplined enough to save up thousands of dollars for airfare. I paid for my roundtrip flight using points from my AAdvantage Aviator Red World Elite Mastercard. The catch? There isn’t one. Now I’m generally not too keen on credit cards, but I am a real evangelist for the perks they bring. After being approved for the card, you’ll need to make one purchase (of any value), then pay off the statement and annual fee. After that, you’ll be given 60,000 points. Bada bing, bada boom. So for the cost of one pack of gum and a $95 annual fee, you too can fly halfway around the world. Pretty crazy, right? With this card, you’ll also avoid paying a checked baggage fee AND receive preferred boarding.

Disclaimer: I am not a paid spokesperson for Mastercard but am totally free, should anyone ask.

IF you are planning on getting this card for yourself, please for the love of all things holy so I can go on (and write about) even more adventures in the future!

Summary: Get a credit card, use my referral code, give me all the points.

Japan is a fabulous country to visit, full of courteous people, ancient relics, and world-class entertainment. The food is simply to die for, and chances are you will never run out of things to do. If you’re looking to expand your travels beyond the non-Western world, Japan is an excellent stepping stone as it’s similar enough to keep your bearings but still plenty adventurous.  If you don’t speak Japanese, absolutely consider going with a tour group or hiring a guide. You cannot fumble your way around like you did that summer in France in college.

Heading overseas is always a big decision that requires a great deal of planning, financial consideration, and group buy-in – but YOLO, right? If you want to see the world, see the world. There’s never a great time to spend hundreds (or thousands) of dollars, but if you’re going to travel be sure and add Japan to your ever-growing list.

And of course, I cannot conclude this post without the biggest thank-you to my incredible host, Chihiro. She was in the perfect tour guide in every way, and I will never forget my time with her in Japan.

Are you planning a trip to Japan? Curious about traveling abroad alone or with a pal? Want to know what life is like across the world? Drop your questions in the comments below, and I’ll be happy to help!

Thanks for reading! With any luck, I’ll have more adventures (and misadventures) to write about soon.