Once upon a time, in a singularly angst-filled moment of spontaneity, a young maiden so decided to obtain a second ear piercing from an enchanted shoppe named Claire’s. I am she and yes – my definition of rebellion is an ultra tame piercing from a store that caters in Hello Kitty and Glee apparel. Haters gonna hate. Anyways, I was on the fence about the whole thing, staring through the Claire’s window like a pedophile.

How much was this going to hurt? Like shot-at-the-doctor or bullet-wound? But wait, should I really let pain deny me this rite of passage? Did I even want another piercing?

I probably looked like SNL’s Kaitlin at the mall…

Seriously, you have to watch the video.

Then I saw a little five-year-old girl walk in with her mother. The worker hoisted her into the chair, threw on some gloves and shot two little diamonds effortlessly through her fatty earlobes. She didn’t bat an eyelash. Alright. If this toddler could muster up the courage, then so could I. I was a nineteen-year-old woman, dangit.

Yes, it hurt. Yes, I made her count to three. No, I didn’t cry (much). Still, it was the crowning glory of my freshman year. Those two little gold studs stood for independence, unbreakable autonomy, and untouchable sass. Word. I felt cool, I felt confident…

And then they grew shut.

Two and half years later, I couldn’t even wiggle a post halfway into that vanishing freckle of a hole. Totally lame, right? Try as I might, I could not shove that blunt post through my ear, and the sass started to slowly slip away. This would never do. I would simply have to repierce them.

“Are you sure you don’t want to just go get them done at Claires again?” asked my roommate, Kasey. At least one of us has some sense.

“Positive. Why should I pay $20 for something I can do myself?”

Those are words to live by, folks – but not this day.

As any true 90s girl would do, I looked to The Parent Trap for inspiration.  Candle. Check. Needle. Check. Earring. Check. We decided to make one last-minute substitution: lemon out, almond soap bar in. Fortunately, one hole needed only the sharper end of the starter earring. Bam. Piece of cake.

Then came the right ear.

Our friend Andrew was in the living room, having no part of  my shenanigan. With my roommate staring in horror from the bathroom door (ready to hurl at any moment), I tried desperately to just shove that post through with raw, blunt force. No luck. I would have to use the needle. I ran the needle through the flame of my Paula Deen candle, Hallie Parker style, and poised to strike. Slowly, I pushed the needle’s point into the invisible opening. But I couldn’t bring myself to do it. Swollen and ticked off from previous attempts, my ear was having none of that. Defeat was inevitable.

“It’s okay,” said my roommate, walking away with a pat on the shoulder. “You can just have one second piercing. It will be cool.”

Something snapped inside. Teeth gritted, muscles clenched, I shoved that needle all the way through.

With shaky, panic-stricken hands, I pulled the bloody needle out, grabbed the earring and shoved it in like a champ. My battle cry (i.e. choice words) flooded the apartment. Finally, after snapping the back into place, I zombie-marched into my roommate’s room – lifeless, void of emotion.

I just threw my arms in the air, Rocky style.

I sort of crawled into this awkward fetal position hug. We stayed like that for a while, until the hot, throbbing of my ears demanded another dose of icing.

“Get this girl some painkillers!” cried Andrew, rushing around like some wartime medic.

After several varieties of painkillers (taken simultaneously, of course) I returned to the scene of the crime, pictured below. If you’re of the squeamish variety, you should just scroll to the end. Really. There’s a dash of blood. 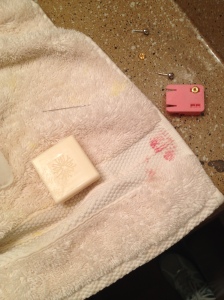 It’s been three days now, so let’s skip to the Q and A portion, shall we?

Q: So tell us, Laura, was Annie Parker overreacting in the film?

A: If anything, she was under-reacting for the sake of PG.

Q: Are you sure you aren’t just a wuss?

Q: Do you wish you had just gone back to Claire’s?

A: Sometimes, but then I remember I have an awesome story.

Q: Do you recommend this method to others?

Q: Laura, you are just so brave. Can we get a picture?!

The evil risk of infection had been overthrown by one foolishly courageous heart. Oh, how the people rejoiced! And so it was that the fair maiden and her glam-tastic golden studs lived happily ever after.

So, I inherited this lamp from my aunt, and to say the least, it needed a little work. The shade was outdated and covered in water stains, and the cream base had yellowed from years of smoking. Instead of throwing out $40 for a new lamp, I decided on a little DIY.

1. Before you spray paint, be sure to clean the base with a wet rag and wait for it to completely dry, or else the paint won’t stick.

2. I taped a Wal-Mart bag tightly round the areas I wanted to avoid painting.

3. Apply 3 or 4 coat, letting the lamp dry completely between each.

4. Finally, grab a cheap, $10 lampshade from Target or Wal-Mart to complete the look.

1. It’s better to do a thousand thin coats than two thick coats with dried drips.

2. Tape the electric cord to the underside of the base during painting.

3. If you’re looking to add some color, you can dye the lampshade in your shower. 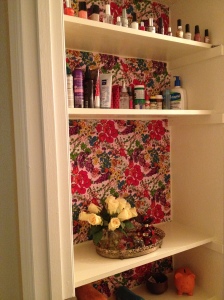 Fact: Wallpaper is expensive. Fact: Fabric is not. With just a couple of yards of fabric, you can line the back of any bookshelf, kitchen or bathroom shelving. You’d be surprised what a difference it can make!

1. Measure each and every nook and cranny of the shelf. It’s tedious, but don’t cut corners!

2. Iron the fabric before cutting.

3. After tracing the lines on the wrong side of the fabric, using a pen or other non-bleeding utensil, cut out the squares.

1. You may need a friend for this one to help you keep the fabric pulled tight.

2. When cutting the fabric, be sure to cut on a perfectly flat surface like a table or the floor. Sounds silly, but it makes a big difference in cutting striaght lines.

3. Use double-sided tape in between the nails or staples to keep the edges straight.

I’m a big collector of cards, so I had originally wanted to frame some of my favorite Quotable cards over my bed. After accidentally shattering the frame’s glass in the process, I realized I actually really liked the front open so the cards can stand out in a very catchy, 3D way. You probably don’t need instructions for this, but I’m going to type them out anyways.

1. Pick out several of your favorite cards and decide how you want them arranged.

2. Visit the nice people at Hobby Lobby and let them make you a custom mat. Seriously, I know you’re going to be tempted to DIY this too, but it’s very tricky to make perfect, visually-pleasing squares in heavy matting.

3. Arrange cards the way you like, making sure the front page is pulled through the mat opening.

1. Seriously. Don’t try to make the mat yourself.

2. Try to find cards of the same size. For instance, all Quotable cards are 5″x5″.

3. If you use your overhead fan a lot, you may want to consider using the glass as they will flap wildly in the breeze.

Looking for more ideas? Follow my blog to receive updates about my next DIY post, where I’ll be telling you how to make a very posh bed canopy for under $25!

After finding inspiration on a Disney video blog, I simply had to try my hand at replicating these DIY Disney nails. While Disney may not captivate you the way it does me, you can always substitute it for…well, anything. For this project, I summoned the help of my good friend and newly discovered hand model, Hannah Pickrel. So whether you’re combing for sleepover ideas, procrastinating an essay, or (if you’re a guy) trying to figure out what in God’s green Earth is happening here, stay tuned. Hopefully you’ll find these Disney Nails as magical as I do.

1. After removing any previous polish and applying a standard base-coat, paint all of the nails white.

2. After the white has completely dried, apply a coat of silver glittered polish on the tips of the nails, omitting the ring finger. Begin on the very ends of the nails and work your way up gradually to the half-way point.

3. Once that has dried, use a gold glitter polish to apply two coats in the same way. You want the glitter to accumulate most at the end of the nails and dissolve upward.

4. Now that 8 of your fingers are finished, its’ time to address that empty slate of a ring finger. For this project, you’re going to need some buy some Disney tattoos at Wally World. Cut the tattoo of your choice to fit the size of your nail (if you’re doing a princess, try using just the face.)

5. Apply the tattoo directly onto your fingernail just as you would to your skin, using a wet cloth or paper towel. Once you remove the paper, tuck any remaining tatoo underneath the nail.

When they’re finished, you’ll be as happy as Hannah! Well, hopefully.