If the film of my life, I’m entering the middle: almost through with college, no wedding on the calendar, no buns in the oven, no dream job to run to and no future in some trendy metropolitan. Don’t get me wrong, I wouldn’t change a thing. But where is the life ABC Family amd romcoms promised me? You know, hip young twenty-something in a refurbished loft with a glamorous job, decked in high-end fashion (at a discount, of course). I have no refurbished loft, I work at a museum and I shop at Target.

If my life were recorded on VHS, I could simply fastfoward through the days of penny-pinching, indecision and slurping Ramen noodles in the car. I could trade all the confusion for premium cable, real leather and a solid sense of self. I could even leave behind past failures, as unsalvagable as my Craigslist furniture. Best of all, I could shed adolescence without a single growing pain and cut straight to the happily-ever-after dance sequence.

What good is a glass slipper if Cinderella never even danced with the prince? Who would have cared if Frodo finally returned the ring were it not for 10 grueling hours of butt cramps? So what if Clark Griswold makes it to Wally World or if Harry Potter defeats the one who must not be named? Would it even matter that Romeo and Juliette died if they had never (way too quickly) fallen in love to begin with? Without the middle, does the story even matter?

The middle is either everything or nothing to you – and that makes all the difference.

Every mundane moment of every regular day will someday be your greatest treasure. You’ll look back and tell your grandchildren (or seven sweater-wearing cats) about life as a broke college kid, shopping at Target and working at some museum while living in a second-rate apartment with no overhead lights. Now, I don’t know what you’ve got planned for 2014, but I know what I’ll be doing. I will be cherishing today, tomorrow and every single ordinary day in this short but wonderful life.

Because someday, I know I’ll give anything to be stuck in the middle again.

2. Never wear your hair in a ponytail twice in one week. So I guess you pick today.

4. As long as you wear mouse ears, you’re obviously a mouse. Duh.

5. If your name is Aaron Samuels, push your hair back.

6. Nipple-less tanks are so fetch.

8. You can only wear jeans and track pants on Fridays. No exceptions.

10. The bigger the hair, the more secrets.

14. You can still rock Spring Fling in a body cast.

15. Confidence is the best accessory of all—mathletes jacket included.

So, how many of these tips should you actually use? Trick question! 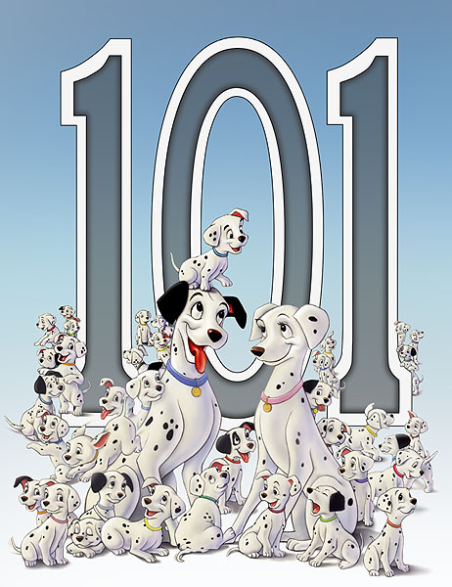 If you know me at all, you know that the Dalmatian is my favorite dog. You’ve likely also connected the dots (pun intended!) to note the correlation with 101 Dalmatians. It’s not hard to spot (I’m killing myself here!). It’s no secret that I plan on buying a Dalmatian when I grow up, much to the dismay of my fun-sucking friends. They all seem to think Dalmatians make terrible pets. We’ll see about that. Without further ado, here are 101 reasons to love Dalmatians.

If you actually read all 101 reasons, then I’d like to this moment to commend you and award you this virtual gold star. But seriously, don’t you have homework or a job or something?