On one of my typical Jenna Marble’s video binges, I came across this glorious treasure called “Boyfriend Does My Makeup.” If there’s one thing I’ve learned from America’s Funniest Home Videos, it’s that anything which makes a man look like a total idiot is bound to be hilarious. It’s a scientific fact, and this video is no exception. In case you haven’t had a chance to see the original, here it is:

I gawked at the horrendous Franken-Cover-Girl that Max No Sleeves created and thought to myself, my boyfriend is super savvy and well-rounded in bizarre skills. I bet he could put Max No Sleeves to shame. So on a random weeknight, while in one of those weird moods where things like living-room-gymnastics seems like a good idea, I talked him into doing my makeup. What could go wrong, here? He’s a 22-year-old man, not a toddler. I laid out the arsenal, sticking to the basics, and let him go to work.

Him: “I know how lipstick works, so I’m going to start with that.”

Me: “Whatever you think.”

I turn to  the mirror. 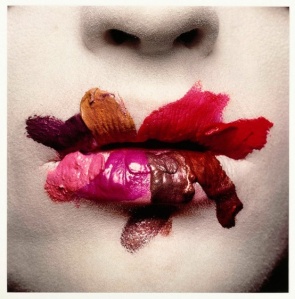 Me: “Should you maybe clean that up a little?”

Him: “Nah, I think it looks pretty good.”

Despite the horror I decided not to say anything, as that’s the first rule of the game. Then, without warning, disaster struck. With the lipstick turned all the way up, I watched in slow motion as he slowly shoved the cap down over my $22 Lancome lipstick.

To cry was futile. It was too late.

Note: the faint of heart should turn away now. The crime scene evidence shown below may not be suitable for all audiences. 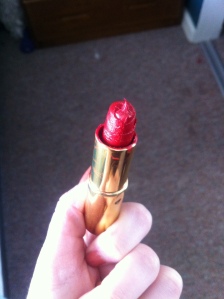 Half my lipstick was jammed into the cap like marmalade, and I couldn’t even be mad. I suggested the game; I gave him expensive makeup; I stupidly suggested a bad idea for a cheap blog post. After mutual consent to end the game, I tried furiously, furiously, to talk him into letting me do his makeup, but that flag didn’t fly. Of course, that too was based on a Jenna Marble’s video…

So here’s the moral, kids: Y Chromosome + Makeup = Toddler + Makeup. Just use the Walgreen’s stuff. There’s a time and a place for Boyfriend Does My Makeup, and while it may not have been last Wednesday during Swamp People, I’m confident the time will come. Stay tuned, friends, because Boyfriend Does My Makeup Part II will soon be coming to a theater near you.

P.S. Think your man has what it takes? Try the challenge for yourself, and post your results below.

P.P.S. Have you followed my blog yet? Click “Follow” at the top of the page to receive regular, unobnoxious updates on my blog!